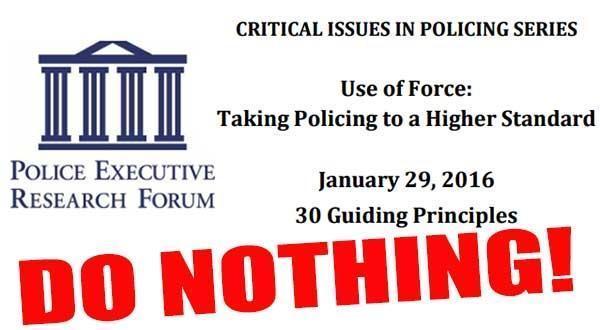 The Police Executive Research Forum (PERF) is ostensibly and organization made up of “police executives” who seek to “improve policing.” In my opinion, it is little more than a police-hating, leftist-front, dedicated only to advancing leftist politics. Guest editorial from John Farnam originally published at Ammoland

PERF recently published a list of thirty new “standards” with regard to police use of deadly force, which they are currently promoting.

The stated goal is to “reduce police shootings,” justified or not! For example, they want police to be absolutely prohibited from shooting at moving cars, unless someone in the car is shooting at them. So, when an officer is about to be crushed to death by a violent murderer driving a car, he may not shoot the driver through the windshield in order to save his own life. He is required to simply allow himself to be murdered, rather than defend himself.

Curiously, in publishing these suggested “standards,” PERF cites no supporting research, except their own “study.” On the committee who wrote the standards, there are no street cops and no subject-matter experts, just “executives.”

Worst of all, these “standards” are all outcome-based (sometimes called “ prophecy-based”). It is a leftist staple, and here is what that means:

They contend that all “poor choices” made by police officers are Constitutionally impermissible. Well, how do we know that choices made by responding officers were poor ones? We know, because there was a “bad outcome,” eg: a violent felon is killed by police gunfire. Had “better choices” been made, they naively assume no one would have been hurt. Officers should have known in advance, should have been able to precisely predict the future.

So, any time there is a “bad outcome,” involved officers must all be prosecuted, because they are assumed to have made “poor choices,” and thus automatically “violated policy.”

The beauty of “doing nothing” is that it can always be done perfectly! No one can ever find fault in the “way” you did nothing. As soon as you step forward to act, as police are paid and expected to do, someone (in the aftermath) will point out where you could have done it better! According to PERF, where there was (at least in theory) a “better way,” then the officer involved needs to be prosecuted for his failure to be perfect!

You can see what a can of worms this is!

Our officers will thus be encouraged to “do nothing” and “take no action.” In fact, they are threatened with prosecution when they take any action that leads to a “bad outcome,” which is always assumed to be prima-fascia evidence of their falling short of perfection!

I have scant patience with these leftist clowns! Their self-representation of “moral superiority” is merely cowardice, masquerading as “piety.”

“All men are afraid in battle. The coward is the one who lets his fear overcome his sense of duty. Duty is the essence of manhood.”

About John Farnam & Defense Training International, Inc
As a defensive weapons and tactics instructor John Farnam will urge you, based on your own beliefs, to make up your mind in advance as to what you would do when faced with an imminent and unlawful lethal threat. You should, of course, also decide what preparations you should make in advance, if any. Defense Training International wants to make sure that their students fully understand the physical, legal, psychological, and societal consequences of their actions or inactions.

It is our duty to make you aware of certain unpleasant physical realities intrinsic to the Planet Earth. Mr Farnam is happy to be your counselor and advisor. Visit: Defensive Training International