Hunting Geese Not a Sit and Wait Game 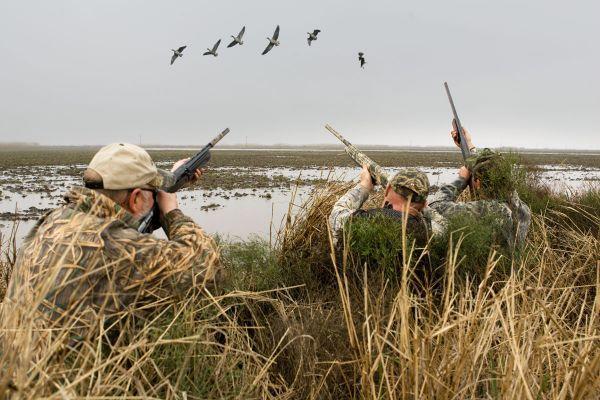 Ryan Flaming loves to hunt — he's gone out of state for an archery elk hunt and for pronghorn. He loves playing what he calls a game of chess while hunting whitetail deer and plans on trying mule deer season this fall. He's hunted all kinds of birds and water fowl, and tried coyote hunting as well.

“If there is a season for it, I will probably hunt it,” Flaming said. “I enjoy being out in nature.”

A Harvey County Extension Agent by day, he enjoys each individual challenge that arises from hunting. One of his favorite seasons is Canada Geese, a season that opens up in October for Kansas.

Flaming shoots a 12-gauge shotgun for geese, often going with a group of friends who enjoy putting their birds in the freezer, wrapping them in bacon and pulling them out to grill during the summer months.

According to the Kansas Department of Wildlife and Parks, the resident Canada Geese are members of the Great Plains Population, ranging from the southern areas of Saskatchewan and Manitoba, through North Dakota and south into northern Texas. The other population of large Canada Geese in Kansas is the Western Prairie Population, which nests in eastern Saskatchewan and western Manitoba and winters from North Dakota south to northern Texas. These two populations are the result of restoration efforts. The Great Plains and Western Prairie Populations are managed jointly.

Flaming said finding a place to hunt geese, and waterfowl in general, is easier than other game.

“Geese destroy a lot of crops,” Flaming said. “With deer, people prize the big buck more and are willing to pay money to shoot them. People have figured out they can lease their ground out for deer. It's harder for someone without a lot of money...Geese you usually hunt a couple of times and then move on to another field.”

He encourages scouting an area, watching for where the geese are landing and nesting — then asking the landowner for permission to hunt. If permission is granted, wait for a cloudy or rainy day to the scouted area.

“You want cloudy days for geese,” Flaming said. “With a sunny day they can pick you out better. The nastier the weather, the better. ... It keeps them closer to the ground and wanting to land quicker.”