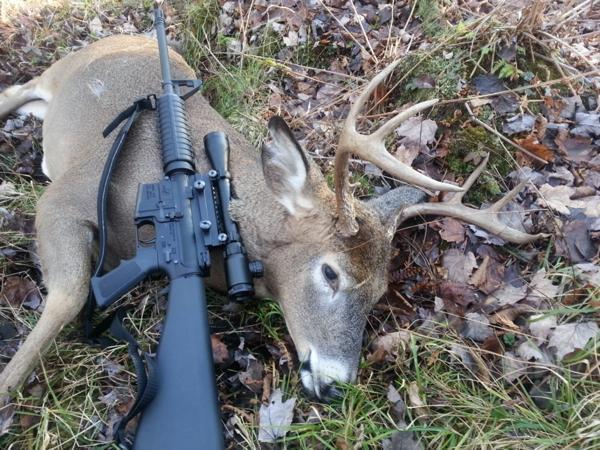 After the Orlando nightclub shooting, Democrats criticized the routine sale of the type of semiautomatic rifle used by Omar Mateen. Hillary Clinton called them “weapons of war.” Illinois Sen. Dick Durbin said that if you used a gun like the AR-15 — or the similar Sig Sauer used in Orlando — to go hunting “you should stick to fishing.”

But many gun owners say they use semiautomatic rifles to hunt regularly.

In interviews with TIME, leaders of 15 state shooting groups said semiautomatic rifles are popular with hunters in their states. Hunters say they favor the gun for its versatility, accuracy and customizable features for shooting animals. The semiautomatic feature, which allows these guns to shoot up to 45 rounds a minute, is not always necessary, but useful in some situations, hunters say.

“It’s the most capable tool for the job at this time,” said Eric Mayer, who runs AR15hunter.com. “Bar none. Period. It is.”

Despite the criticism of semiautomatic rifles and their use in high profile mass shootings, gun control advocates say they are not focused on banning them, as they were during the 1994-2004 assault weapons ban. Stacey Radnor, spokeswoman for Everytown for Gun Safety, said that they are more focused on strengthening background checks and closing loopholes on sales than on banning specific guns.

Here are seven hunters who use an AR-15:

The jagged cliffs of Na Pali Coast State Park feature prominently at the beginning of the 1993 blockbuster film Jurassic Park. Rising out of the Pacific, the green slopes are home to more than the world’s image of reincarnated dinosaurs. Feral goats roam these mountains, and Jay Perreira often has them in the sight of his AR-15.

Perreira has lived on Kauai, the fourth-largest Hawaiian island, his entire life. For the last 15 years, the construction worker has hunted with the AR-15. Semiautomatic rifles have been used to hunt since the early 1900s. In 1963, a few years after the rifle was invented, Colt advertised the AR-15 as a “superb hunting partner.” (Colt confirmed to TIME the authenticity of this advertisement.) Today, Americans own at least a few million AR-15s and as many as eight million, according to the National Shooting Sports Foundation.

The 45-year-old told TIME his favorite feature of the AR-15 is how easily it can be disassembled. The gun can be taken apart and carried several miles in a backpack through Kauai’s mountains to goat sanctuaries. “I know the rifle gets a really bad rap,” Perreira said. “But around here, I know a lot of guys that have them.”

A west Texas pig sighting is not a cute barnyard encounter; it’s a reason to grab a rifle. Across the southern United States, wild pigs cause $1.5 billion in annual property damage. Boar can weigh up to 300 pounds, run up to 30 miles per hour and in Jonathan Owen’s experience, quickly turn violent.

“You do not have to hunt with an AR-15,” Owen, an Abilene, Texas resident who runs SHWAT.com, told TIME. “But the practical benefits of being able to engage a lot of pigs at a time, safely, is a big win.” The semiautomatic and large capacity magazine features allow Owen to take several shots at multiple pigs in a few seconds. When engaging a pack of wild pigs in west-Texas’ shrubbery, Owen says these features ensure his safety.

“Hog hunting can be the pursuit of dangerous game,” Owen said. “They can turn on you.”

Check out the "Three Little Pigs" video to learn more about how to shoot these hogs:

Antelope jackrabbits dart up to 30 miles per hour between bunches of upright dead sticks that could generously be called bushes. For skilled shooters, hunting these northern Arizona sprinters is a challenge. But Eric Mayer told TIME it’s nearly impossible without an AR-15.

The semiautomatic rifle can stay focused on a moving target between shots. Mayer, a Los Angeles resident who owns several outdoor recreation websites, says this is a huge advantage. “A semiauto changed my life,” Mayer said. “I’m able to make the (shot) because I don’t have to run the bolt (and) lose the target in my scope.”

In a bolt-action rifle, a metal bolt must be manually pulled back and pushed forward to load a new bullet after each shot. Bolt-action rifles have been used to hunt since the 1800s. While these rifles, as well as shotguns, remain popular with hunters, semiautomatic guns have become popular because they can take multiple shots without losing sight of an animal.

A firearms instructor and longtime gun rights advocate, Gary Marbut hunts with the larger caliber cousin of the AR-15: the AR-10. Marbut’s rifle is still semiautomatic, but fires with more power. Many hunters say the standard caliber, or diameter of the bullet, of an AR-15 is preferable for hunting smaller animals. The average power of the shot can be less than a standard hunting shotgun. For Marbut to successfully hunt elk that weigh at least 500 pounds, the larger bullet is a must.

Marbut, 69, first used the AR-platform during three years he spent in the military. Adopted by the U.S. military in the 1960s, the M-16 is the fully automatic version of the AR. The military still uses a variant of the gun. The familiarity Marbut developed with the gun in the military prepared him to hunt with it when he returned home to Montana.

After stalking elk for hours through forested mountainous terrain in western Montana, Marbut says he needs a gun he can trust to hit its mark. That gun is his AR. “The last two elk I’ve taken, I took at about 300 yards,” he told TIME, a distance equivalent to three football fields. “They were both headshots.”

George Sodergren grew up around guns in southern Maine. He respects them and chooses his hunting firearms carefully. He does not believe a semi-automatic rifle is necessary for all animals. But for coyotes, he makes an exception.

After a heavy snowfall, Sodergren, a 49-year-old machinist, can track these skittish forest predators. Smaller than the typical golden retriever, a coyote combines its sense of smell with an ability to run up to 40 miles per hour to stay clear of threats. To kill one, Sodergren needs a versatile gun. “When you grab the (AR-15), it’s like shaking the hand of a good friend you haven’t seen in a long time,” he told TIME.

When Sodergren hunts coyotes, he positions himself downwind so they cannot smell him. Coyotes can approach in packs, so Sodergren says the AR-15 gives him the chance to land more than one shot. “I believe in one well-placed shot,” Sodergren said. “(But) if you’ve got multiple animals or you miss, you’ve got a quick follow-up shot.

While the AR-15 is preferable for smaller game, Will Chambers makes the same gun work for animals of all sizes. To hunt deer, Chambers outfits his AR-15 with a larger caliber receiver — the long end of a gun that determines the size of the bullet the gun fires. He changes the bullet diameter from the standard .223 to .277 inches. That small difference can mean killing an adult deer in one shot or condemning the animal to a slow death. There are hundreds of ways to customize and accessorize the AR-15.

Ohio is one of several states that bans hunting deer with rifles. Chambers, a 34-year-old farmer from northwestern Ohio who also runs AR15hunter.com, heads to northern Michigan to hunt deer with his rifle. At dusk in January, Chambers shot 70 yards through a snowy forest with his AR-15 and killed a whitetail doe.

“These are not scary black rifles,” Chambers told TIME. “These are very useful tools for hunting.”

To be clear, Kenny Gallahorn does not hunt with an AR-15. His gun uses a smaller bullet. But his Ruger .22 gun is both semiautomatic and widely used by hunters.

In Kotzebue, Alaska, the Iñupiat tribe hunts seals and other animals to survive. Subsistence hunting among Alaskan Natives is popular across the state, but it is vital in the northwestern region with no roads that is roughly the size of Indiana. For an Iñupiaq like Gallahorn, hunting and gathering can make up to 50 percent of annual household food.

Seal hunting comes down to timing. As Gallahorn takes his boat into the Kotzebue Sound in the fall and spring, he watches the edges of floating ice. There, for only a second, seals emerge. “If I shoot and miss the first one, another one will pop up five feet away,” Gallahorn told TIME. “That’s the need for a semiautomatic.”

If he hits a seal the first time, Gallahorn says there is no need for a second shot. He floats over to the animal, spears it and pulls it into his boat. The spotted seals Gallahorn hunts are typically two- to four-feet long and weigh up to a couple hundred pounds. He eats them two-to-three times a month.

And when it comes to seal hunting, Gallahorn is not alone in his use of a semiautomatic. “The majority of people hunt with semiautomatics,” Gallahorn said.