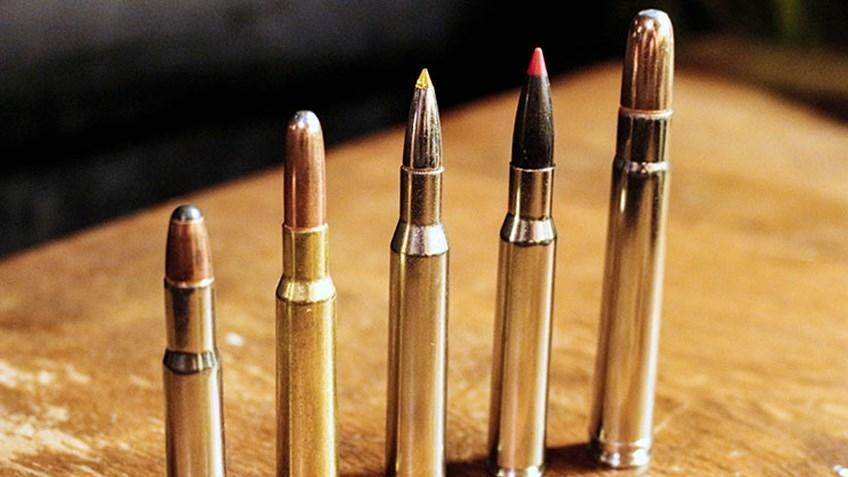 Author Phillip Massaro writing at American Hunter has penned a wonderful piece on his choices for the top 5 centerfire rifle cartridges of all time. Of course your favorites may be different. But Mr. Massaro knows of what he speaks and makes a great case for his selections when it comes to the most common hunting scenarios. See if you agree.

The American Hunter editors and I have a bit of a torturous relationship. They dare me to write some of the most volatile web features ever, and I accept. I’m actually starting to enjoy it. These listicle-style articles force me to draw on all of my experiences, and make some choices that some agree with, and some do not. At any rate, this time I've been asked for my top centerfires of all time. So, that means, from .17 caliber up to .700 Nitro, I can only pick five. Somebody’s feelings are going to be crushed, and I apologize in advance. I’ve considered the numerous hunting situations available to us all, irrespective of latitude, longitude or hemisphere and those hunting cartridges that have proven to be universal. Look, I’m a huge fan of the .318 Westley Richards, but I know it doesn’t belong in this list. Regardless, here are the cartridges that I think will get the job done, as well as be perfectly suited to the most common hunting scenarios.

Worthy of a spot at the top of heap, rests the .30-’06 Springfield. Funny thing is, I’ve used the Springfield much less than many of the other popular .30 caliber cartridges, but I’ve used it enough to recognize its merits. It will, invariably, perform on par with the uber-popular .308 Winchester, and if the shooter does his or her part, will accomplish many of the same goals as the .300 H&H Magnum or .300 Winchester, when used within ethical hunting ranges. The ought-six can utilize the full range of .30 caliber bullets—from 100 to 250 grains—and use them well. It was born and bred for war, but those engineers inadvertently designed one of the most useful hunting cartridges we’ve ever seen.

In 1912, when the prestigious firm of Holland & Holland released their .375 Belted Magnum, there was a plethora of cartridges available to the big game hunter. The .404 Jeffery, .416 Rigby, .450/400 3” Nitro Express and 9.3x62mm cartridges were all on the menu, yet the .375 H&H Mag. would go on to survive and flourish, when all the others had was a brief heyday. In my opinion, the .375 H&H Mag. is the most useful cartridge ever designed. Even among the heavyweights, like the .458 Win. Mag. and .470 Nitro Express, the .375 H&H represents the legal minimum for the truly dangerous game, and yet is a cartridge that almost anyone can shoot accurately. With modern bullets—like the Nosler AccuBond or Cutting Edge Raptor—it is a perfectly viable elk and moose cartridge, as well as a Cape buffalo and elephant gun. If you were to choose but one rifle for the largest game, you will be very well served by a .375 H&H; the bullet weights range from 235 to 350-grains, and can definitely get the job done.

Short, rimmed and under-appreciated by most of today’s generation, the .30-30 Winchester Centerfire still represents all the cartridge any woods hunter really needs. Let’s be frank—it launches a 170-grain bullet at over 2,200 fps, giving all the killing power we hunters need when the shots are under 100 paces, and has accounted for an unbelievable amount of game since it was introduced in 1895. There are modern bullet developments—like the Hornady LeveRevolution and Federal Trophy Copper—that improve the performance, giving both a better trajectory and terminal performance. The slim and svelte lever-action rifles chambered for the thirty-thirty make a great choice in the thick woods, yet offer enough accuracy to properly place the shots where they need to be. I still take the Winchester Model 94 AE XTR my dad bought for me when I was sixteen into the woods annually, and I never feel undergunned.

This is the oldest of the lot—having set the benchmark in the early 1890s—but still an amazing performer. In this modern era of cartridges that approach or break Mach III, the venerable 7x57 Mauser will still make a fantastic choice for any hunter; with this venerable case, bullets of 120 to 175 grains can be launched at muzzle velocities that are useable in the hunting fields, and will take a range of game from coyotes and jackals up to moose and eland. Couple the 19th century case with the bullets of our modern era, and we have a combination that would have quickly gained the attention of W.D.M. Bell. We can develop all the magnum cartridges we want, the 7x57 Mauser will remain a sweet-shooting, effective killer that will allow the average rifle shooter to place very accurate shots, and our developments in bullet technology have done nothing but improve the potential of the Mr. Mauser’s timeless design.

I’m going to say this upfront: I’ve never really been a huge fan of the .270. Yup, you’ve read that correctly. I was raised to choose a rifle cartridge based upon the ability to be as flexible as possible, and the .270—as a big game cartridge—usually offers bullets weighing between 130 and 150 grains. That’s not a wide choice, certainly less than the 7mms and 30s. But I must say that the .270 launches those bullets in a fantastic manner, and they work well for a wide variety of big game animals. Messrs. O’Connor and Keith quibbled about the effectiveness of this cartridge, in the era when a cup-and-core bullet was all that was available. However, bullets like the Swift A-Frame, Nosler Partition and Trophy Bonded Bear Claw have guaranteed this cartridge a place on the classic list. I’m not sure I’d trade one of my .300 Winchesters for a .270, but if I were offered one to use on a hunt, I wouldn’t be concerned in the least. For deer and other similar sized game, the .270 is right at home, giving all the striking power you’d want and as flat a trajectory as you’d need. If you want a coyote/varmint gun there are 90 and 100-grain bullets. Yes, though I prefer some other cartridges a bit more out-of-the-box, there’s no denying the validity of the .270 Winchester.