Drones with Guns and the Second Amendment 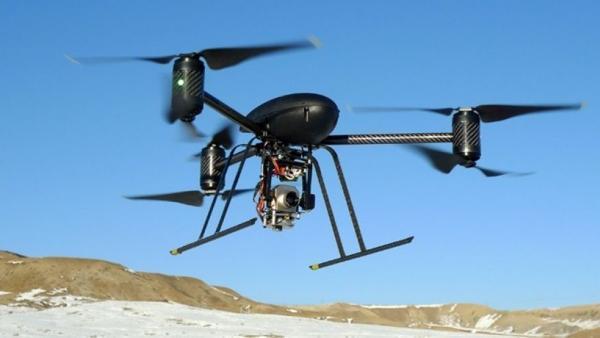 A spectacular (and loud) YouTube video showing a drone rigged with a handgun actually firing bullets freaked out a lot of folks last year. In response, several states have passed legislation outlawing such weaponized drones. In 2008, the Supreme Court affirmed in its decision in District of Columbia v. Heller that "the Second Amendment protects a personal right to keep and bear arms for lawful purposes, most notably for self-defense within the home." So does the Second Amendment protect the right of Americans to have and use armed drones for self-defense?

In 2012 on Fox News, Justice Antonin Scalia observed: "Obviously the [2nd] amendment does not apply to arms that cannot be hand-carried—it's to keep and "bear", so it doesn't apply to cannons—but I suppose there are hand-held rocket launchers that can bring down airplanes, that will have to be decided." Scalia's comment provoked attorney Lawrence Rafferty to snark, "Do we draw the limit at briefcase nukes that can be carried in one's hand?"

In the alternative, what about allowing police to use armed drones? Last year, North Dakota passed legislation prohibiting police drones from carrying lethal weapons, but perhaps allowing them to be armed with tasers or pepper spray. In October, The Wall Street Journal reported that representatives from Taser International had met with some police officials to discuss the idea of installing stun guns on police drones. In 2014, the South African company Desert Wolf unveiled its Skunk Riot Control Drone that could shoot pepper spray, paintballs, or plastic bullets. In 2015, The Times of India reported that the police in Lucknow had bought five drones to use for crowd control (a quick Google search finds no instances of them being used yet).

One tiny bit of good news is that many states have adopted laws that require the police to obtain a warrant to use drones for surveillance.

Interestingly, several states, including Michigan, Oregon, and West Virginia, forbid the use of drones to spot, harass or hunt wildlife. Oregon explains that it adopted the drone hunting ban because "it is the intent of the Legislative Assembly that the wildlife laws embody the sporting ethic of fair chase hunting...." None of the drone hunting ban laws I examined made an exception for drone hunting on private land. The states likely claim to have the authority to enact such bans because wildlife is legally "owned" by the states, not by private individuals.

In any case, if a privately owned armed drone is operated on the owner's private property (or with the permission of the property owner), are states constitutionally constrained from outlawing it? As noted, several states don't think so. Legislative push will come to constitutional shove when a drone equipped with a firearm or a bomb, either as an act murder or an instance of stupidity, does kill someone.

Watch this armed drone in action (warning it's loud!)