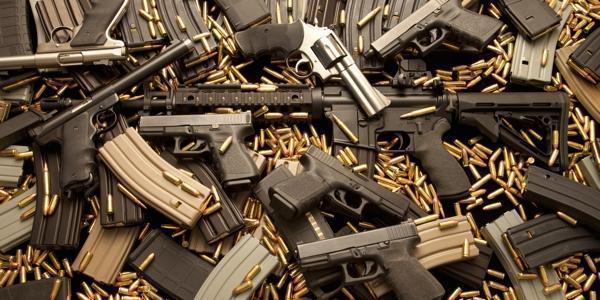 Every mass shooting and act of terror is an opportunity for liberals to push gun control. Something must be done to stop gun violence, but there are four problems with the liberal argument for gun control. These are: (1) hypocrisy; (2) reality; (3) misapplication of blame; and (4) discrimination. In the end, there is a better, more reasonable solution.

House Minority Leader Nancy Pelosi said whether a baby in the womb is human doesn’t have anything to do with policy. To win over pro-abortion women, Hillary Clinton said the Constitution does not protect the unborn. Liberal policy is to ignore the value of some life to advance a perceived “right” to attain votes.

When society arbitrarily dictates which life has value, it does two things: (1) fosters a culture where not all human life has value, so some humans can be discarded or treated less than others, to the point of killing them; and (2) says humans can arbitrarily decide which human life has value. So, aborting some (preborn) is warranted and morally acceptable because they do not have value, while aborting others (born) is unwarranted and immoral because they have value.

The second problem is the contradiction of solutions. The liberal answer for defeating violent extremism (i.e., radical Islamic terrorism) is jobs and social programs. Vice President Joe Biden, at a three-day White House summit on terrorism, opened by stating societies must provide economic alternatives to terrorism. Marie Harf, a spokeswoman for the State Department, told Chris Mathews on “Hardball” that we must counter terrorism by providing job opportunities. In February 2015, President Obama’s framework for fighting violent extremism was education, jobs, and social programs. So if the root cause of violence and the solution to violent extremism overseas is job opportunities, education, and social programs, it should be the political solution to violence in America. Not gun control.

Third, liberals ensure Americans that government control of guns is not a restriction on Second-Amendment rights. This is a contradiction in right-control.

Some want to turn what’s illegal into a right (e.g., drugs, prostitution, or illegal immigration) or argue that decriminalizing certain things (e.g. drugs or prostitution) lessens crimes. About guns, however, the argument is the opposite. Either it’s viewed as a “right” not to protect or argued that criminalizing it would lessen crimes.

Making guns illegal or restricting access to them won’t end gun violence. By analogy, possession and use of many controlled substances is illegal, yet people possess and use them. Indeed, illegal drug overdose is the leading cause of death in America (a study released by the Drug Enforcement Agency found that overdose death is the leading cause of injury death in the United States, over vehicles and firearms).

Obama has used Australia and England as lofty examples of Western societies ending gun violence. However, depending on the study cited, there is no clear and convincing evidence that gun homicides in Australia have declined since the ban on certain weapons and their buyback plan (National Firearms Agreement). Studies do agree that suicide rates have declined.

The Associated Press, though, says criminologists agree the National Firearms Agreement has reduced gun homicides. Results following England’s self-proclaimed “toughest gun control laws in the world” are known and are not good; crimes using banned weapons have risen. At a glance, gun control in Australia (which doesn’t have a Bill of Rights), seems to have decreased gun violence; yet, it depends on the studies. In reality, however, prohibiting an act or an object does not necessarily reduce crime or violence.

Journalists and many politicians blame guns, mental illness, or some other thing when a shooting occurs. Although mental illness could be a contributing factor, it is not the cause. After Columbine, the media also blamed Marilyn Manson. Manson’s response was twofold: (1) times have not become more violent, just more televised and (2) the blame for the shootings is not music but us: “When it comes down to who’s to blame for the high school murders in Littleton, Colorado, throw a rock and you’ll hit someone who’s guilty.”

Violence is not something new to this world. Before guns there was violence and mass killings. What has changed is the mass production of violence and its glamorization. Movies and video games romanticize violence or make it grotesque, desensitizing the conscious and natural disdain towards it. When the heart becomes numb to violence and taught to act on passions, a violent reaction will occur when someone decides to act. As Jesus said, it is not what is put into the mouth that defiles a man, but what comes out of the heart. Blame falls not on the instrument, but on us as individuals for defiling our hearts.

It’s a utilitarian worldview centered on the self to discriminately apply the Constitution or natural rights on only certain groups so the majority within a protected class can live in harmony. Selfishness of rights breeds violence. We think ourselves advanced, caring, and tolerant, but still foster discrimination and violence towards certain groups when advocating for laws that protect one class over another. Advocating for gun control while advocating for abortion and pornography is utilitarian selfishness, based on the premise that the preborn and women can be discriminated against while appearing altruistic.

What We Should Do Instead

First, foster a culture of respect for all human life, from conception to natural death. Also, in response to mass shootings, the response should be focused on the shooter’s depraved heart and the religion or philosophy that drives him, not on the instrument used to kill. Individuals must start to control what comes into the heart, and society must root itself in virtue, the Commandments, the Beatitudes, and spirituality.

School education needs to include moral and ethical principles founded on the natural law. Last, offering free classes on firearm safety will teach responsible use of firearms, decreasing its glamorization. Wars and crimes will never be eradicated, but violence can be substantially reduced.