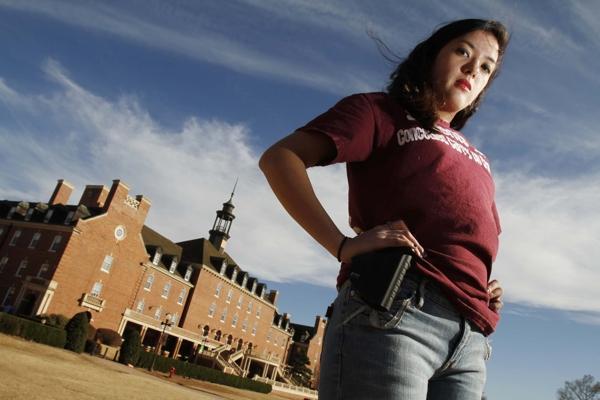 At the time of an attack we all know that the one thing that can save you is not a phone call to the police. The following is an account of a woman that was attacked on her college campus. While she had a concealed carry permit, she wasn't allowed to have the gun on campus. This is her story...

In college eight years ago, I was raped in a parking garage only feet from the campus police office.

I could see the police cruisers parked for the night as this stranger raped me, pistol to my head. I knew no one was coming to help me.

At the time of my attack, I had a Nevada concealed carry permit. But in Nevada, permit holders are not allowed to carry firearms on campuses. As someone who obeys the law, I left my firearm at home when I went to school. The law that was meant to safeguard me – the gun-free zone – only guaranteed I would be defenseless.

Eventually the man was caught, tried and convicted – not just for using a gun in gun-free zone, but also for raping two other women and murdering one. My attacker was not a student, nor did he have a concealed-carry weapon permit.

Any survivor of rape can understand that the young woman I was when I walked into the parking garage that night was not the same woman who left. My life has never been the same. Campus carry would have saved my family and me a great deal of untold torment.

My case is a perfect example. Despite law enforcement’s best efforts, they can’t be everywhere at once. All I wanted was a chance to effectively defend myself. The choice to participate in one’s own defense should be left to the individual, not mandated by the government. I should not have to hand over my safety to a third party. Laws that prohibit campus carry turn women like me into victims.

(Contributing Source: Amanda Collins via the nytimes.com. The woman pictured above was not the author of the story or the original vicitim.)