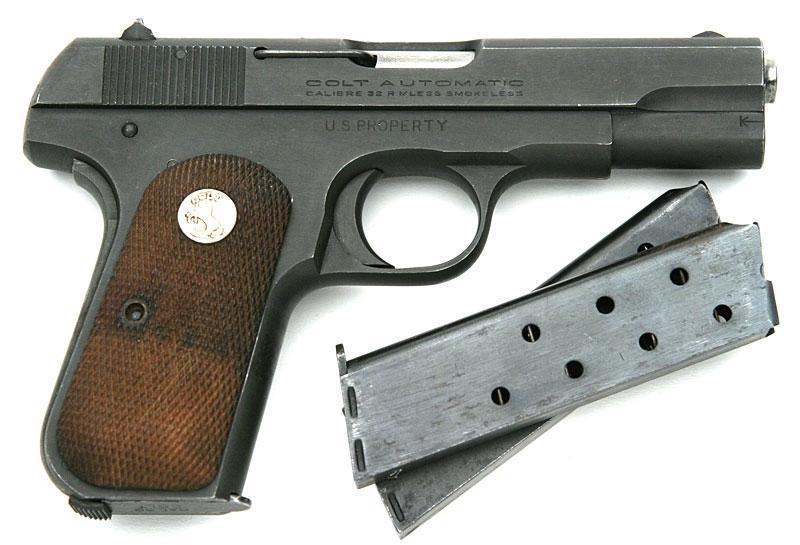 Ammoland's Tom McHale has always had a man crush on the Colt Model 1903 (although he confesses, he is not exactly sure why.) Shooting the dinky-ish .32 ACP, it’s not exactly a manly gun, but it makes up for its lack of virility in other ways. Here is a great piece Tom wrote about the history of the Colt Model 1903 Pocket Hammerless and where to get one brand new.

With this gun, it’s not the size, it’s how you use it, right?

Arguably, it was ahead of its time with features we still appreciate these days like melted carry contours, single-action design, hammerless design (sort of), and a grip safety. It’s a sharp looking gun and once you handle and fire one, you’ll dig it – I promise. So it’s not a .45 ACP. That’s OK. It’s alright to appreciate a gun for its other attributes.

Years ago, I bought the one shown here at a local gun show. Some quick research indicates that it was manufactured in 1919 and is a Type III Model 1903 variant. We’ll get into the whole type thing in a minute.

2. When gangster John Dillinger has gunned down outside of the Biograph Theater in Chicago, he was carrying a 1903 Pocket Hammerless Pistol variant… maybe. Conspiracy theories abound as to whether he was armed or not and whether the gun was planted by an FBI already in trouble for shooting too many unarmed suspects. If you made me bet, I believe Dillinger did have a gun, and that it was a Colt 1908 – the .380 ACP version of the 1903 design. 3. Speaking of the 1908 model, the .380 ACP variant was produced from 1908 to 1945. Just under 140,000 of these were made with models shipped to interesting customers like the OSS, the Shanghai Municipal Police, and the British Lend-Lease program.

4. The 1903 Pocket Hammerless Pistol… isn’t hammerless. While there is no hammer visible, it’s there – just covered by the rear of the slide.

5. George C. Scott, playing General George Patton, had a 1903 throughout the movie. If you look carefully, you’ll see one tucked into his waistband in various scenes. In one famous sequence, he fired one at German warplanes while daring them to “shoot him in the nose.” Unfortunately, even in the movies, the 1903 and it’s .32 caliber bullets didn’t knock any planes out of the sky. In real life, Patton was issued a model 1908 as was the custom for General Officers at the time.

6. Throughout the 42 years of production, Colt produced five primary variants of the 1903 Pocket Hammerless Pistol. Designated Types one through five, the variants reflected relatively minor changes. For example, Type 1 pistols had four-inch barrels. Types 1 and 2 used separate barrel bushings while types 3 through 5 used an integrated bushing machined at the end of the barrel. Types 4 and 5 added magazine disconnect safeties. Of course, there were variants within each series like different grip styles, exterior finishes, and such.

7. When you pause to look, you’ll find that TV and movies are chock full of the Model 1903 Pocket Hammerless Pistol. Rick Blaine (Humphrey Bogart) carries, brandishes, and even fires one in Casablanca. Sam Spade and several other characters handled and/or used them in the 1931 classic, The Maltese Falcon. Even the half-cartoon movie Who Framed Roger Rabbit featured a gold-plated 1903. R.K. Maroon, Eddie, and even Roger Rabbit himself handled the gun at various points in the movie. TV appearances were made in The Avengers, the original Mission Impossible television series, and even Star Trek: The Next Generation. Other famous movie placements include Key Largo, The Big Sleep, Sudden Impact, L.A. Confidential, All The King’s Men, and dozens of others.

9. Bonnie Parker used a very budget garter holster (tape) to affix a 1903 to her thigh and break partner Clyde Barrow out of prison. I’m guessing unholstering left a mark. 10. While the barrel is unattached to the frame, the 1903 is a pure blowback design. When the pistol fires, only the slide moves backward to eject the spent casing and strip a new one from the magazine. When you field strip a 1903 pistol you’ll see grooves in both barrel and frame that mate, thereby locking the barrel to the frame.

11. Before World War II, Colt sold batches of 1908 models to various airlines. In fact, at the time, it was a requirement that pilots be armed. While Colt didn’t designate special models, airline customers often engraved the pistols with things like “Property of United Airlines.” No word on what the TSA might have thought about that policy. You can buy a brand new Colt 1903 today. The company has re-introduced a Colt Model 1903 Officers Model. It sports a parkerized finish and wood grips. Rumor has it that a shiny blued version may make an appearance at some point.

Tom McHale is the author of the Insanely Practical Guides book series that guides new and experienced shooters alike in a fun, approachable, and practical way. His books are available in print and eBook format on Amazon. You can also find him on Google+, Facebook, Twitter and Pinterest.