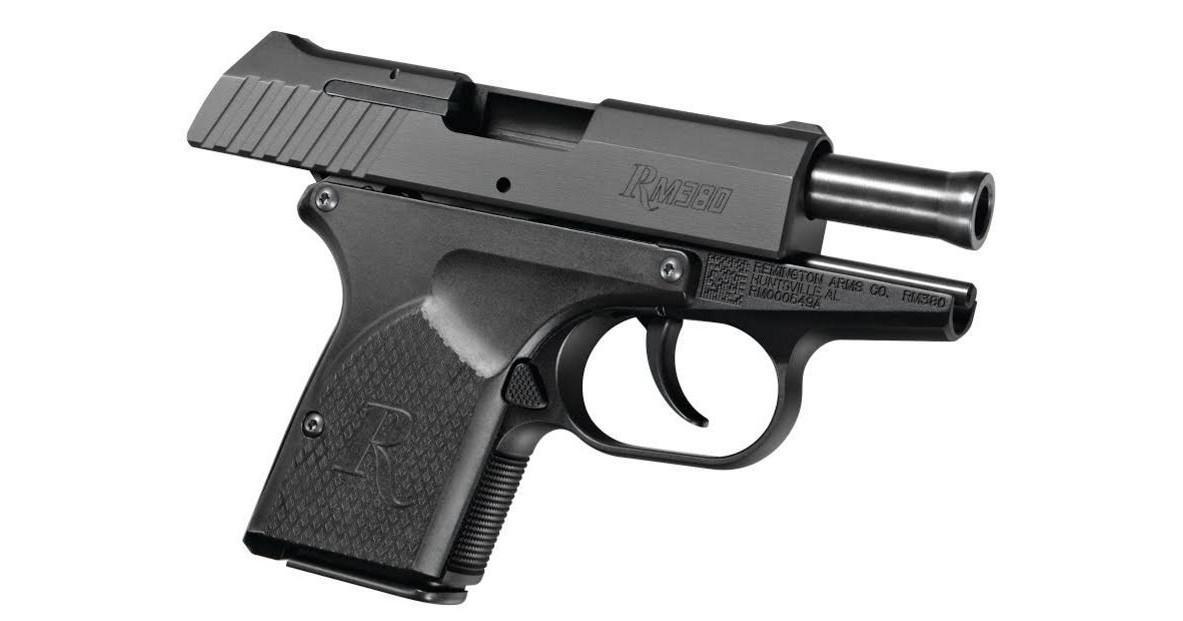 Remington jumped headfirst into the pocket pistol market with the new RM380 DAO. Here is a great review of the Remington RM380 from our friends at Handguns Magazine.

Sales of pocket pistols continue to be healthy because the concealed carry movement is getting stronger as more and more Americans are taking responsibility for their own safety, and more and more states are recognizing our inherent right to self defense. Now Remington has jumped into that already deep pool with its new pistol, the Remington RM380.

When Remington showed its new gun to the media last year, it was quick to point out the Remington RM380 wasn’t the same pistol as the Rohrbaugh R380 with a new logo on the grips but rather a completely new pistol based on the Rohrbaugh. The first thing the Remington engineers discovered when examining the Rohrbaugh was that the pistols coming out of the small company were all hand-assembled and hand-fit. That’s fine if you’re a small semicustom shop, but when you’re Remington and looking to produce thousands of guns, the dimensions had to be firmed up and the manufacturing process streamlined. Also, designers changed a few things they felt improved the design, and I agree.

As a double-action-only gun, the RM380 has no external safety, and the only controls are the slide stop lever and the magazine release. Simple is good.

With a barrel 2.9 inches long, the Remington RM380 has one of the longest barrels in its class, and this length will wring the most out of the .380. This is an all-metal gun, sporting an anodized 7075 aluminum frame, but even though there’s no polymer in the construction, it still weighs just 12.2 ounces unloaded. The pistol has an overall length of 5.27 inches and a height of 3.86 inches. And it is thin. The slide is but 0.85 inch wide, and the grips at their base are only .95 inch wide.

The Remington RM380 has snag-free metal sights machined into the slide. They are flat black, as is the slide, and they’re so small I wouldn’t want to have to find them in dim light, but the pistol points naturally to help aiming. The full-length recoil spring guide rod is steel.

The 410 stainless steel barrel is finished black and features an integral ramp. The end of the barrel is flared to mate with the slide. There is a cutout in the barrel hood that ostensibly serves as a loaded chamber viewing port. I’ve found these barrel hood cutouts are nearly impossible to use to spot cartridge cases except in direct sunlight. However, they are another safety feature that allows the gun to be sold in states with strict handgun regulations.

Tarr’s main complaint was how far the trigger had to be pulled before the gun fired. This could prove a problem if you’re wearing gloves.

The Remington RM380, on the other hand, is a locked-breech design with a tilting barrel, and as a result the slide is easy to cycle. If you’re strong enough to pull the trigger, you’ll be strong enough to work the slide—which features nicely aggressive, flat-bottomed serrations for a sure grip. The Remington RM380 actually has dual recoil springs, but even so the force needed to chamber a round is perhaps only a third of what is needed to chamber a round in my straight blowback Beretta .380.

This is a double-action-only, hammer-fired gun. The trigger is steel with a smooth and slightly rounded face. The trigger pull is long and the same every time, and you’ll need to let the trigger go all the way out before you can pull it again for a follow-up shot. Yes, I know the long trigger pulls of pocket guns are their safeties, but I don’t have to like it. A shorter trigger pull would be welcome.

The spur-less hammer is flush with the rear of the slide and comes into view as the trigger is pulled back. The trigger pulls of every Remington RM380 I’ve tried, whether preproduction models or the current production-run test gun, have been smooth.

The flat hammer won’t protrude to catch clothing. The sights are minimal, which is fairly common on pocket pistols. Luckily, lasers are already available for it.

The only real complaint I had with my test gun was the trigger. Yes, the trigger pull was smooth, but there was significant stacking (weight increase) right at the end. The trigger pull weight up until the final stacking measured 7.5 pounds, but it took an additional 1.5 pounds of pressure (total trigger pull nine pounds) to make the gun fire. During the media rollout last year, Remington was advertising the trigger pull as 7.9 pounds, but now I see the company has increased the spec to 10 pounds—probably the result of a stronger hammer spring to ensure reliability across a wide range of ammunition.

However, while the stacking was unfortunate, the thing I liked least about the trigger wasn’t the pull weight or the length but rather how close to the frame it broke. The back of the trigger was nearly touching the frame. I think someone wearing gloves would have a hard time getting the gun to go off.

The Remington RM380 is supplied with two six-round magazines, which are long enough for 9mm cartridges with welded spacers in the back to position the nose of the rounds properly in relation to the feed ramp. One has a flat base plate, the other an extended polymer base pad, which allowed me to get all my fingers on the gun. However, I don’t have very big hands, and I would highly recommend to anyone interested in purchasing any gun to put hands on a sample at their local gun store to see if it’s a fit.

The grip panels are glass-filled nylon with minor texturing and the Remington “R” on both sides. They are replaceable through removal of a Torx-head screw, and Remington has plans to offer various color options. The rear of the frame is smooth, but the frontstrap has nice texturing.

There’s not much to grab onto with the RM380, but between the checkered frontstrap and the slightly undercut trigger guard, it feels secure in the hand.

I can get only two fingers on the frame, but because of the shape of the grip and the frontstrap checkering it feels secure in my hand. This is also due in part to the undercut below the trigger guard that gets the shooter’s hand higher up on the gun. The pistol has a small beavertail hump to prevent hammer bite.

Remington has had a few problems recently getting new designs from prototype to production stage—the R51 being the biggest offender—but at 200 years old the company isn’t exactly a new and untested firearms manufacturer or unaware of how business should be done. While it took six months longer to get the Remington RM380 into full production than Remington had expected, my test gun is not a prototype or preproduction sample but rather was manufactured at Remington’s new Huntsville, Alabama, facility as part of a regular production run. In fact, it is the first new pistol being produced at the Huntsville facility.

Remington got ahead of the game and teamed with a number of accessory manufacture to ensure holsters—such as the Crossbreed (top) and Recluse—and other goodies would be available when the gun went on sale.

As .380s go, I found the Remington RM380 pleasant to shoot, even one-handed. The long trigger pull made it challenging to shoot fast, and the gun isn’t exactly built for long-distance accuracy, but shooting offhand at 15 yards I could hit a pie plate-size target as fast as I could find the sights and pull the trigger, and my hand wasn’t sore when I was done.

The only problem I experienced with the pistol was with the SIG Elite FMJ ammo. The profile of the bullet was such that when there was one round left in the magazine as it came up it ticked the slide stop just hard enough to lock the slide back. I had this problem with only one of the magazines, and then only in the first 50 rounds. After that I didn’t have any problems; the pistol ate everything I fed it.

Remington Outdoors also owns Barnes Bullets, and the company sent me some of the new Barnes TAC-XPD .380 ammo featuring an 80-grain copper solid bullet. This bullet is lighter than standard .380 projectiles and posted slightly faster velocities while being soft shooting. It has a copper solid JHP projectile, and if you are somewhat recoil sensitive, perhaps this is a load you should consider.

Remington’s maintenance schedule for the pistol is lubrication after 250 rounds, cleaning after 500 rounds, and recoil spring replacement after 2,500 rounds. With the rounds I’ve put through the pistol I’m somewhere between lubing and cleaning without any problems other than the one mentioned.

Gen 4 guns like the G41 come with four replaceable backstraps (including two with beavertails) in a convenient clip that also includes a spare frame pin and pin pusher. It can be shot without a backstrap in place.

Smart modern gun companies have been teaming with accessory manufacturers so by the time their guns come out there are holsters and other goodies available for them. One of the silver linings of the delay Remington experienced in bringing the RM380 to market is that by the time you see guns at your dealer, holsters and lasers for the pistol will be easy to find.

Remington has partnered with a number of companies to produce holsters for the RM380, including Galco International, Crossbreed, Recluse, Gould & Goodrich, Viper, Flashbang and Talon Holsters. Viridian and Crimson Trace are offering lasers for the Remington RM380.

In addition to the test pistol, Remington supplied a sample Recluse Perfect Pocket Holster, Crossbreed IWB holster and Crimson Trace laser, and I test drove all three. The Recluse is a leather holster with a square front designed to conceal the shape of the pistol in your pocket. I discovered the combination of two layers of leather with a gun in-between does a good job of retaining body heat, and the pistol isn’t as quite as quick to draw, but the Recluse does completely mask the shape of the pistol in your pocket, making it look like a wallet at any distance.

The Crossbreed IWB is a molded Kydex open-muzzle holster body mounted on a thick piece of leather with two angle-adjustable metal belt clips to either side. The leather curves around the wearer’s hip and the belt clips are placed perfectly to keep the holster snugged into the body.

It does a good job of hiding the pistol, but I’m not a fan of this type of IWB rig. While a lot of people like the Crossbreed designs, it is a perfect example of what I’ve taken to calling amoeba holsters—a giant blob which unnecessarily takes up a lot of belt space. An 8×6-inch piece of thick leather stuffed in my pants seems more than a bit much for such a tiny gun.

The Crimson Trace laser unit mounts on the trigger guard of the pistol and has an activation button underneath the trigger guard against the frame. I think lasers are best suited to guns like the Remington RM380, which are small in size and have sights that are difficult to see. The only problem is the gun wouldn’t fit into either of the provided holsters with the Crimson Trace mounted, but it will still fit into a pocket just fine.