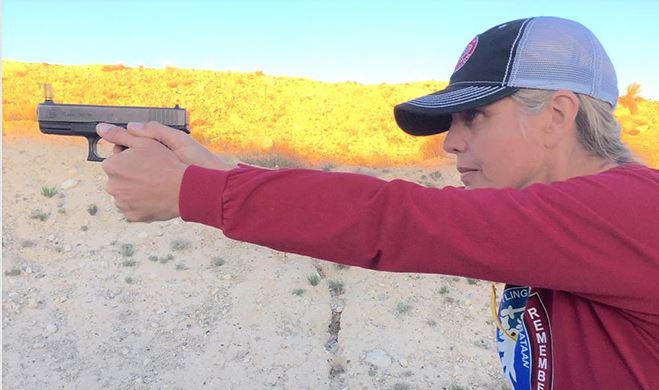 The author performs the case drill, one of several essential handgun drills every pistol shooter should know and practice. (Photo: Team HB)

Here are three drills I use with myself and with students to test and confirm that fundamental skills, especially trigger press, are in place. They’re also a great way to evaluate a trigger and sight picture vs. point of impact on an unfamiliar handgun.

The case drill is easiest when done with a friend who can re-set the empty cartridge case. It’s a little slower practiced alone. It’s done with an empty firearm, so remove the magazine and double-check that the chamber is clear before closing the slide. If you’re practicing off-range, remove ammunition from the immediate area, like putting it in another room.

Hold the gun in firing position on target. Have a friend balance the empty case of a fired cartridge on your front sight—or atop the slide just behind the front sight if the sight is slanted.  Press the trigger to “click,” keeping the case in place. Reset the slide.  Repeat until you get at least five full trigger presses in a row while keeping the case balanced.

This dry-fire exercise[2] makes shooters better without eating up ammunition.  And it can be practiced at times when you can’t get to the range.

Start at a distance of three yards for beginners, or five yards for more accomplished shooters. Fire five consecutive shots, slowly and deliberately, without checking where each one hits.  Success is measured by progressively smaller groups, working toward one ragged hole in the target.  Increase distance to seven yards when three or five come easily.

This drill is especially telling for the most common error, jerking rather than pressing the trigger.  The target will generally show low and left grouping for right handed shooters, or low right groups for left-handers who anticipate the shot. Shots landing centered and low indicate spastic finger action on the trigger sans anticipatory dread on the shooter’s part.

A 99-cent pack of paper plates can last for months with this practical drill.  Staple a paper plate, preferably an eight-inch one but a ten-inch plate works too, to your area.  Draw, or move from a low ready position, and fire two rounds onto the plate, as quickly as you can do so safely.

To make this exercise really grow your shooting skills, confirm that you see the front sight on the plate for each trigger press.  Looking at the plate will work at close distances, but as you move back

Read more from our friends at Guns.com