Jumping into competition shooting on a budget 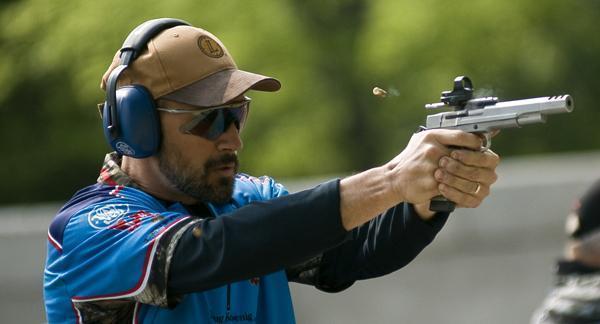 One of my new friends recently asked me about the gear necessary for launching out into the world of IDPA.When it comes to IDPA and other gun games, a lot of people will tell you to buy the best of everything to avoid wasting your money. Eventually you’re going to want the best as you become more competitive.

I’m going to argue the other direction. I think that you should get your feet wet in the sport. After you’ve begun to learn what you really like, you will be better equipped to make those major purchases if and when you’re ready. You can compete for quite some time with your initial purchases and there will always be a market for your entry-level gear. You won’t lose much money, if any. Truth be told, I’ll bet you’ll end up using that entry-level stuff as loaner gear to get your bros involved in the not-so-distant future.

I’m gonna recommend a long slide/barrel version of whatever you carry. If there isn’t a long slide version of what you carry, I’d recommend that you carry something else. (Unless your carry piece already has a 5 inch barrel, if so I say bravo.) Be careful to make sure that you don’t select a weapon so long that it won’t fit into the IDPA box though. Also, I’d say that going 9mm makes a lot of sense due to cost effectiveness and recoil management. .4o is a viable beginners option too but I think you need to commit to reloading if you make this choice.

Go with something simple and relatively cheap.

One could make a strong case for using the holster you normally carry, and I’d recommend you do that at least once, but it just isn’t realistic if you hope to be competitive. I’d point you toward one of the kydex IDPA competition paks, like this one from Bladetech will serve you nicely. Bladetech actually has a 5.11 branded set that is even more cost effective and nearly as user-friendly.

There are lots of great timers out there, and I’d say get one. Don’t be afraid to buy a used one. Don’t put off the purchase, go ahead and get one at the outset. It’s difficult to gauge progress in practice without a timer if you’re actually practicing for competition improvement. Something like the PACT Club Timer III will do nicely.

Splurge for electronic. Even if you don’t stick with the shooting competition thing, they will come in handy. If you continue shooting at all, electronic ears are nice. However, if you do continue competing, and I think you will, ears like these will make your time on each stage much more enjoyable.

Get a little vain in this department. Pick something that doesn’t look too nerdy. Especially if you’re going to wear one of those goofy gun vests!

As I just said, I think the standard IDPA gun vests look ridiculous. That being said, the weighted bottom section of the vest does create a practical advantage when clearing your garment to draw your pistol. Still, I tend to opt for a more true-to-life concealment option. Does it cost me time? Probably, but I think that it helps my practice to better aid my training, even if that aid is ever so slight.