Is Competitive Shooting for You? 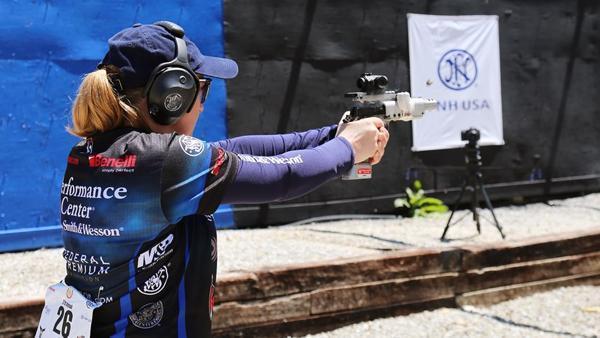 Humans have been participating in friendly competitions since the beginning of time. I guess we have a built-in drive to test our skills and mettle against others. Just look at the majority of shows on TV these days, and I’m not just talking about the classic game shows. Whether it’s cooking, dancing, obstacle courses, or racing around the world, we like to participate in, and sometimes just watch, a good competition. Remember History Channel’s “Top Shot”? Who would have ever thought a shooting competition would be on prime time television?

Shooting competitions with firearms have been around since as early as the 13th century. In the United States, the National Rifle Association came to be in 1871. Concerned about poor marksmanship in the Civil War, Col. William C. Church and Gen. George Wingate founded the organization to promote skilled shooting, training and education. One year later, the National Rifle Matches were held at the Creedmoor Range on Long Island, New York. While the location has changed, those competitions have been going on ever since. Now, the National Matches take place at Camp Perry, Ohio. It’s a bigger deal than ever, and the events draw thousands over a couple of weeks of events.

New types of shooting competitions are coming on the scene all the time, and new generations of shooters are thinking of creative ways to test their skills with rifles, shotguns, handguns, and airguns. Sometimes, competitions (such as 3-Gun) use several types of guns at once, thereby testing a broad range of skills in a single event.

Going to the range for informal plinking is fun, and that’s a perfectly good reason to buy a gun and learn to use it safely. However, once you learn about all the different types of informal local competitions going on at clubs across the country, you might find a whole new passion. Let’s take a quick look at just a few competitive shooting disciplines.

Action Handgun Sports: There are a variety of action pistol sports that we’ll get into more next time. If you have a handgun for recreation or defense, these types of competitions are a great way to have fun while learning to run your handgun better. Competitions won’t teach you defensive tactics, but they will help you improve your basic skills such as getting on target quickly, transitioning to other targets, drawing from a holster, and more. Steel Challenge competition emphasizes speed and hitting multiple steel targets as fast as you can. The International Defensive Pistol Association runs competitions where participants run through defensive scenarios, engaging targets while shooting, moving, and making quick decisions. If you like to shoot a lot, you might check out USPSA shooting. You’ll blaze through courses hitting lots of targets while being measured on your overall speed and accuracy.

Bullseye: These competitions focus on accuracy and are perfectly suited to those who like a slow pace and emphasis on detail and precision. Using a handgun, rifle, or airgun, you might spend a minute or more lining up the perfect shot, then nailing the bullseye.

3-Gun: Arguably the hottest new shooting sport over the past 3 years, a 3-Gun match will have you shooting a rifle, shotgun, and handgun – all on the same course. Most matches have competitors engaging certain targets with one gun type, then switching to the others. You’ll shoot a lot, and have a great time doing it.

Cowboy Action Shooting: If you’re into history and the old west, how about dressing up in period costumes, breaking out a six shooter, lever-action rifle, and period shotgun for a little friendly competition? As much fun for the social interaction as the shooting, you’ll probably not meet a nicer and more fun group of folks. Oh, and the best part is that you get to give yourself a cool western name like Blazing Bart, Evil Roy, or Magnum Mary.

Long Range Shooting: Now in the taking-off stage are long-range shooting competitions. Match your marksmanship skill and ability to read the wind against your peers to see if you can nail targets 500, 800, or even 1,000 yards down range. Super challenging, but super fun!