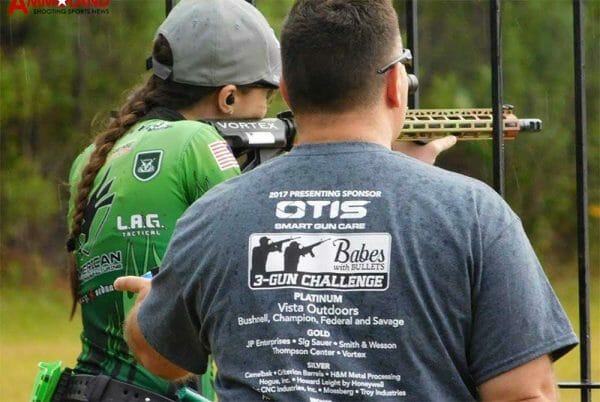 Princeton, LA – -(Ammoland.com)- Only a few spots left for this annual event!

Sponsored by Otis Technology and held at Kay and Jerry Miculek’s Shootout Range outside of Shreveport, LA.

“Otis is excited to participate in this inaugural event. We've been a huge supporter of the Babes with Bullets training camps for many years. We are proud to stand behind Babes with Bullets as they travel across the US and teach women about firearms and firearms safety,” states Heather Bennett, Marketing Manager for Otis Technology.

The Babes with Bullets 3-Gun Challenge was designed to meet the growing demand for 3-gun matches that are female friendly, but not at the exclusion of men. The match features two Domains, with an aim to have an equal number of female and male participants.

All match participants shoot the same stages of fire, with the Women’s Domain and Men’s Domain scored separately. Learn more…

About Babes with Bullets:

Since 2004, Babes with Bullets have been training novice women about firearms and firearms safety. Co-founders Deb Ferns, camp director, and Kay Miculek, head instructor, have led these camps for almost twelve years. In 2010 multigun training was added to the camp's extensive handgun training schedule and allowed for Babes alum to bring their husband, boyfriend, son, to join them at the range for top-notch 3-gun training. The 2016 camp schedule is now available.

The post Join us for the 3rd Annual Babes with Bullets 3-Gun Challenge appeared first on AmmoLand.com.