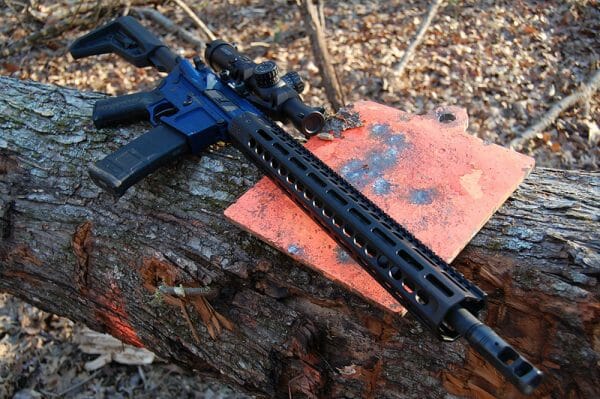 U.S.A. –-(Ammoland.com)- While FN Manufacturing is most commonly known as the military’s supplier for M4 rifles, in recent years, they have released firearms designed specifically for 3 gun. The FN 15 Competition Rifle, is the perfect combination of battle-field reliability and the benefit of competition performance.

What does that look like? Well for starters how about this…

At 100 yards I was averaging 1-MOA on 5 shot groups with 55 grain Federal American Eagle .223, non-match ammunition. I would consider that impressive. There is little doubt in my mind this gun can shoot sub-MOA, I shot these groups on a busy indoor range, and I know I pulled a few shots. The FN 15 Competition Rifle made a meal out of this steel from CTS Targets.

Equipped with an 18” chrome-lined CHF Precision Heavy Barrel with a 1:8 RH twist the FN 15 Competition is more than a tack driver. What I’m saying here is, if you are missing the target with this rifle, you might want to work on that trigger pull!

If you are jerking the trigger in the FN 15 Competition rifle then we need to work on some fundamentals. The FN-15 comes installed with a single-stage competition trigger from Timney that breaks right around 2.5 lbs. This trigger is perfect for 3 gun where you will encounter multiple close-range paper targets, and steel targets at varying ranges from 100 yards up too and beyond 600 yards.

This is an opinion, but the shape of this trigger yields the benefits of both curved and flat faced triggers. With a slight curve like this trigger has, it is much easier to index the trigger and make consistent breaks.

While doing bill drills (stand 20 yards from target, 10 shots under