The cadets from Texas A&M have now won this event three years in a row and four of the last five years.

The CCMU Centerfire Alpha team won the event and the National Championship by setting a new sport team record in Centerfire with a time of 165.79 seconds.

The CCMU Centerfire Bravo team finished in 2nd place overall (an SASP team is a four person squad, the team score for the competition is the total time of the four individuals on the squad.) Third place in the match was won by the squad attending from the United States Military Academy at West Point (USMA). 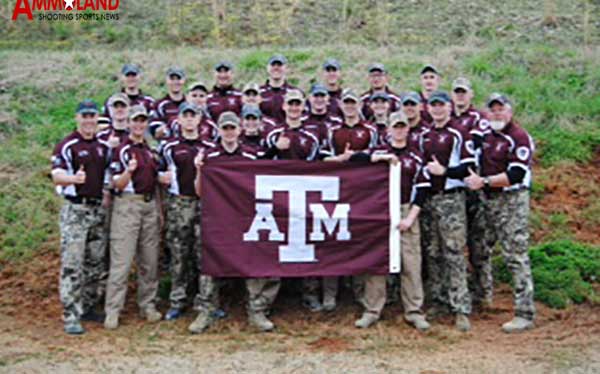 With nineteen universities represented, the 2018 SASP Collegiate National Championship was the largest in the history of the sport.

The cadets of the CCMU nearly swept the centerfire individual awards for the match missing the High Overall Centerfire Shooter by 5/100’s of a second, but taking the remaining four spots in the top five and putting six shooters in the overall Top 10. For the third year in a row, CCMU also won the High Lady in Centerfire.

The top individual Centerfire score was fired by Ryan Flowers of Clemson University with a time of 38.41 seconds, he was followed closely by CCMU Cadet Wade Ledbetter with a time of 38.46 seconds. Cadet Ledbetter is the first CCMU cadet to break the once mythical 40 second mark in Centerfire competition. He was closely followed by CCMU Team Commander Nic Mrak, shooting this match for the final time, with a score of 40.15 seconds.

The High Lady trophy in Centerfire has been awarded to a CCMU female cadet for the third year in a row. For the second year in row it has been won by junior CCMU Cadet Savannah Butters '19 with a time of 63.31 seconds. Cadet Butters is no stranger to winning at national championship level matches as she was the 2016 High Lady in Rimfire at Nationals, and a year ago she won the High Lady in Centerfire trophy. Notably, Cadet Butters was firing the Walther Q5 Match pistol, a version of Walther's incredibly popular PPQ series. Walther is a valuable sponsor of the CCMU and their pistols have performed exceptionally well in the hands of male and female CCMU cadets.

Although this is a team match, individual scores are recognized and awarded. Six CCMU cadets finished in the Top 10 Overall, including four of the Top 5. Three of the four stages in the match were won by CCMU cadets (fastest individual time on the stage), including the newest stage, called “M”, which