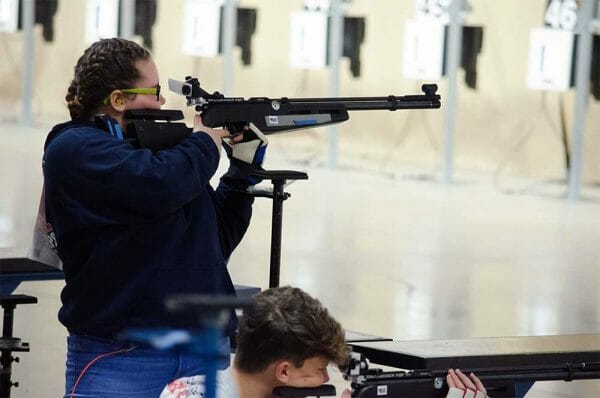 USA – -(Ammoland.com)- At first glance, Jadelynn Kendall looks like any other air rifle competitor. She carries her equipment into the range, sets up her gear and takes the firing line, just like all of the other members of her Marion High School Army JROTC sporter rifle team. Only her second year in the sport, she’s still learning the ropes.

“I’ve always been nervous to try new things,” she said.

Despite her fears, the 15-year-old from Indiana has come a long way. Her high school years were preceded by days of hardships and growth, but her teammates and those around her have helped to give her the confidence to stand strong – both on the leg she was born with and on the prosthetic she conceals beneath her clothing.

Because though appearing the same on the outside, Jadelynn is actually unlike anyone else. She is equipped with a powerful character that, despite being constantly given extra challenges through her disability, allows her to take on the world one step at a time.

When she was only five years old, Jadelynn's leg was damaged in a horrific accident.

Doctors and nurses worked hard to save it, but they were unsuccessful. They had to amputate. The loss of part of her body and the addition of a new prosthetic leg to fill the void left young Jadelynn in a new world of both physical and emotional struggles.

“There’s been a lot,” she said. “Most of it was relearning everything that I had already learned to do. That was hard. But once I got the hang of it, it was okay.”

“Accepting the fact that it’s not going to come back was hard too,” she admitted. “But once I accepted it, I felt a lot better.”

The acknowledgement within her mind allowed the rest of her body to move forward as well. She discovered activities she enjoyed and clung to them – refusing to let a small physical difference set her back.

She grew to love swimming and became a member of a team for a few years, where she would swim without her prosthetic. The experience taught her balance as she stood on the starting block, with only one leg, to begin a race. Jadelynn has also tried volleyball to test her athleticism.

While she worked to understand her new life, others around her had to do the same – and some cowardly refused to. Jadelynn admitted that she was bullied in school because of her prosthetic and had to move around before she discovered a school where she could be accepted. That’s when she found Marion High School. She found encouragement there through friends and adult leaders. She is currently a member of her school choir, and she takes a Chinese class that’s led by an instructor who, according to Jadelynn, makes learning fun.

And, of course, she joined