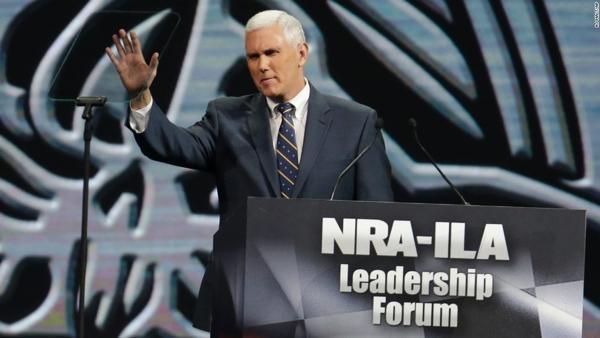 Mike Pence not only brings a strong gun rights record to the Republican ticket, but also a real history of warring against gun control while a U.S. Representative and, thereafter, the Governor of Indiana.

2003 – Pence supported legislation to prevent the use of the court system as a backdoor method of bankrupting the gun manufacturers and sellers. The legislation was designed to prevent frivolous suits resulting over the “misuse of guns” that were legally made and sold.

2005 – Pence supported the Protection of Lawful Commerce in Arms Act (PLCAA). President George W. Bush signed PLCAA into law in October 2005 and to this day the law protects gun manufacturers and licensed gun dealers from frivolous suits over guns that were legally made and sold, then misused. Hillary Clinton has heavily criticized PLCAA during her campaign. She wants the law revisited and reversed so victims of gun crime can sue gun manufacturers and licensed gun dealers.

2007 – On The Issues reports that Pence fought against gun registration for residents of Washington DC in 2007.

2009 – Pence supported legislation to secure national reciprocity for concealed carry, thereby abolishing the cumbersome regulations that allow a permit holder to carry in his home state but not all others. The legislation was HR 197, which said, “Notwithstanding any law of any State, a person who is not prohibited by Federal law from possessing a firearm and is carrying a valid license to carry a concealed firearm may carry in another State a concealed firearm.” The bill stated that if the state to which the permit holder traveled was a concealed carry state, then the permit holder was bound to follow the concealed laws of that state. If it was not a concealed carry state, he could still carry in it, but had to follow certain stipulations spelled out in HR 197. These stipulations included prohibitions on carrying in a police station, courthouse, etc.

2011 – Pence co-sponsored the Firearms Interstate Commerce Reform Act; an act which would have “removed certain Federal restrictions on interstate firearms transactions.” The act would have abolished barriers to gun purchases for military personnel and others who spend the majority of time in another state due to assignment and/or duty, thereby allowing them to purchase firearms when needed just as they would if they were back in their state of residence.

2014 – As Governor of Indiana, Pence signed a bill allowing persons with concealed carry permits to keep a gun in their cars in school parking lots. This removed onerous gun controls placed on the backs of law-abiding parents or school employees simply for the act of driving onto school property. The bill also protected parents with concealed carry permits from being charged with felonies for possessing a gun while waiting in a parking area to pick their child up from school. After the bill was signed, Pence spoke to Real Clear Politics, saying:

I have strongly supported the right to keep and bear arms. I truly believe that firearms in the hands of law abiding citizen’s makes our families and our communities more safe, not less safe. And the bill that we just signed here in Indiana really was a common sense reform. We actually have parents that had a permit to conceal and carry a weapon that we’re finding themselves guilty of a felony just by dropping their kids off to school. So we just — we made a modest change, a common sense change in Indiana law. And I strongly supported it.

2016 – Governor Pence signed House Bill 1085; a bill which tightened otherwise cumbersome requirements, thereby streamlining the purchase of National Firearms Act (NFA) items. The NRA-ILA reported, “[HB 1085] requires a chief law enforcement officer (CLEO) to sign an application for the transfer of any item regulated under the NFA within 15 days if the applicant is not prohibited by law from receiving it.” By requiring action within 15 days, HB 1085 “[removed] any possibility of personal bias and creating a statewide standard” for sales of NFA-regulated items.