Back to News[2]
September 7, 2022 NSSF, ATF, DOJ Emphasize ‘Don’t Lie for the Other Guy®’ PHOENIX — As part of an ongoing national effort to help prevent illegal “straw” purchases of firearms, NSSF®, The Firearm Industry Trade Association, the Bureau of Alcohol, Tobacco, Firearms and Explosives (ATF) and the Department of Justice (DOJ) are reminding the Greater Phoenix area public that stiff penalties are in place for individuals convicted of such unlawful purchases. The campaign is in its 22nd year and is a cornerstone of the cooperative relationship between members of the firearm industry and law enforcement. Billboard, radio, social media, streaming audio and digital advertisements for the “Don’t Lie for the Other Guy®” program have been purchased by NSSF in key locations throughout the region with the message: “Buy a gun for someone who can’t and buy yourself 15 years in jail. Don’t Lie for the Other Guy.” The month-long public awareness campaign was officially launched today. The Phoenix area “Don’t Lie” campaign will total more than 44 million gross media impressions, including more than 57 outdoor billboards, digital bulletin boards and posters. There are also more than 460 radio spots playing and 520,000 digital streaming radio service impressions. On social media, “Don’t Lie” advertisements total more than 2 million targeted geofenced online mobile advertisements on Facebook and Instagram impressions. Phoenix was chosen for this special

Read more from our friends at the NSSF 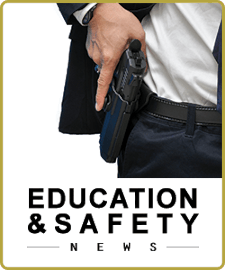